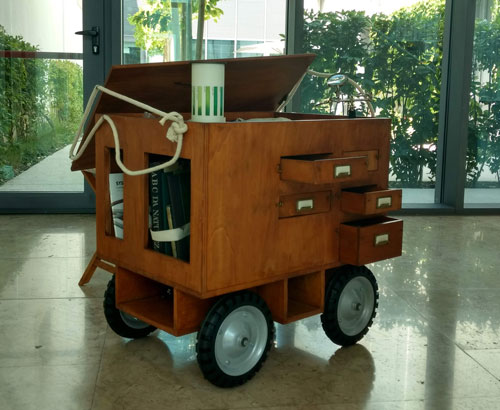 In 1952 the artist Marcel Duchamp stated that everything he made of importance could fit in a small suitcase. It was not a statement of modesty coming from one of the most important artists of the twentieth century, nor a metaphor about the importance of its artistic endeavor. So, in 1936, sixteen years before this statement, Duchamp built a leather suitcase containing sixty-nine reproductions of his most important works, presented as miniatures. This small portable museum, entitled by Marcel Duchamp or Rrose Sélavy (La Boîte-en-valise), is like a booklet of his own work in which each miniature reproduction reflects the important turning points of his artistic work. This suitcase is itself a work of art made of works of art, obsessively and meticulously reproduced.

Catarina Leitão also presents in this exhibition a Portable Museum, a series that she has been working since 2012. One of them, Portable Studio, started in 2013 was constantly updated as needed and is equipped with wheels to be transported to the countryside. So, the artist has at her disposal all the necessary materials, including a tent to compensate for a lack of shelter in nature. Each object within this Portable Studio is itself a work, whether built by the artist, as in the case of Escala de Verdes, a roll with a gradient of tones of green to help the painter in the choosing of the necessary tone, or a magnifying glass, a clipboard that is also a cover and a folding seat.

Perhaps this Portable Studio is the most informative work by Catarina Leitão. The atelier is not a closed suitcase that unfolds in miniatures of works, but a nomadic house, a central work that allows her to create other works and at the same time occupying minimum space so that they can materialize themselves. The concern with the occupied space, the relation with Nature and the permanent struggle between what is natural and what is artificial, formatted by culture and humanity are recurrent themes in her philosophy.

The objects that help the artist refine her view of nature also awaken her scientific side. The series Systema Naturæ (2011) is a set of scientific drawings of invented species that Catarina Leitão not only created but conceived their names according to the method now universally accepted in the attribution of the scientific name to species. Scientific Illustration is in itself a way of disassembling the species so that we can analyze them in such a way as to extract as much information as possible from them. How to extract as much information as possible from an invented species, which only exists because Catarina Leitão designed and named it? And what real difference is there in the way we relate to the species presented in Systema Naturæ from those that we can only have access to in books? In one of the rooms, the artist presents a sculpture, Dendrogram, 2016. Branches arranged in a cloth bag, which look heavy and made of iron, are actually painted tree branches, which confuse us, as to their weight and structure. Catarina Leitão works in this strange universe between the real and the imaginary, the light and the heavy, between wild nature and human manipulation, but above all she develops the desire to keep close to what is indispensable to her. Continuing her path, Catarina Leitão discards what is the superfluous and makes sure that the essence in flux is at her fingertips.